The recently popular handbags with large jewellery decorations come from the French fashion house Chloé. This brand became famous for the first time when in 2005 she released a Paddington decorated with a large padlock. Today, however, we are talking about the Nile Bracelet Bag, to which, as a handle, a large metal rim is attached. The ingenious look was popularized by trend-setters and sapphireers, so that a small, elegant handbag made of leather and fastened with a hidden magnet quickly won the hearts of women from across the ocean. In Poland, we could see her in the hairstyles of Jessika Mercedes and Marina Luczenko.

The minimalist leather frame contrasts well with the clear, eye-catching gold circle. In addition to the standard leather shoulder strap, we can also wear it by holding the wheel (this way it resembles a tiny suitcase), or by putting the wheel on the joint, just like we wear a bracelet. Nile Bracelet Bag from Chloé, it is difficult to get today at an affordable price for the Polish wallet (in online shops they start from 5000 PLN), but similar motifs appear in other designers. What is worth looking at when looking for a handbag for yourself?

First of all, pay attention to what kind of styling you want to use it for. Nile is great for casual or boho outfits as well as sophisticated evening outfits, but not all handbags inspired by Chloé can be said to be the same. The gold rim can also replace accessories if you have no idea what to put on your hand. This type of handbag will also fit perfectly to the set, in which we have already used "jewelry" decorations, such as, for example, zips for the coat or shoes. 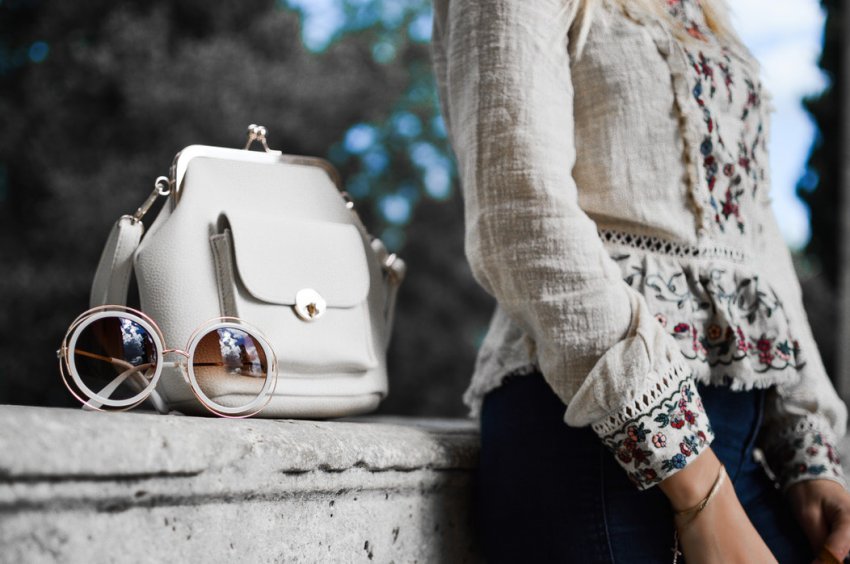 Cheap Nile style handbags can be found on the Internet from as little as 150 zł. Of course you have to pay attention to what and how the bag was made of. As with any major trend, there is an old advice here too: Avoid counterfeits that won't boast you at all, and can even fall apart, by their poor workmanship.

By typing the slogan "handbag with a wheel" in Google you will find many options from other designers who develop the concept of a jewellery handbag in different directions, for example by attaching a metal chain to the wheel, or by placing similar decorations on different materials or styles. It is worth looking at the proposals offered by Laura Biaggi, but also Polish Betlewski. Models with a design similar to Nile have also appeared in netbooks. In Stradivarius you will find a golden circle on envelopes, as well as larger bags, around 70 zł. In Monnari, a more elegant, beige leather model can be purchased for just over 200 zł.

Clothing and jewellery at promotional prices

Every woman survived the situation when she saw the perfect jacket, dress or sweater on the...

What spring cap to buy?

​ The first days of the calendar spring can be cold. In this case, a suitable headgear is also...

With the summer, most women choose to wear breathable dresses and skirts to replace jeans. If...